A Third of British Adults Generously Donate Food Over Christmas 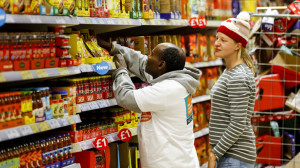 Brits prove their generosity over the Christmas period, as almost a third of the British have donated food to vulnerable people in need.

Despite the chaos and excitement of the festive period, almost a third (32%) of the British public have remembered vulnerable people in need by generously donating food to those in need across the country, according to a new survey published today.
The survey also reveals the generosity across the Britain, as the North West comes out on top as the most generous region (39%), ahead of Wales (38%), South East (37%) and Scotland (37%).

The survey goes on to show that more females (38%) have donated than their male counterparts (26%), while the youngest 18-24 age group is the most generous (38%) when it comes to food donations in the lead up to Christmas.
Food poverty continues to be a serious issue across the UK despite the economic recovery, as figures published by the Trussell Trust last week showed the number of people helped by food banks in the first half of the 2014-15 financial year is 38% higher than numbers helped during the same period last year.

Food donations to the Neighbourhood Food Collection benefit a range of people across the country, with donations going to either FareShare, a food redistribution charity, or food banks charity The Trussell Trust. Tesco provides a 30% top up to the charities based on the collective weight of donated goods.

To date, the campaign has collected 15.3million meals for people in need since 2012, and the target this year is to provide more than 20million meals. The 15.3 million meals includes the 30% top-up, permanent & local collections, plus surplus food provisions. Neighbourhood Food Collection relies on and is bolstered by volunteers.

Tesco is calling for customers to go instore to donate food to designated food collection points. Follow @Tesco for the latest news and use #everycanhelps to find out more about the initiative. Tesco will also be raising money for the FareShare and the Trussell Trust through the sale of special Christmas hats and cards this year.

Lindsay Boswell, CEO of FareShare, said: “Sadly food poverty affects a large number of people across the UK and we are now providing food to 32% more charities than we did six months ago. From homeless hostels to breakfast clubs, women’s refuges to luncheon clubs for older people, these frontline organisations need food more than ever, so we’re thrilled to partner with Tesco on the Neighbourhood Food Collection again this year. This campaign enables us all to help in a simple practical way, as every item of food donated will make a difference to vulnerable people in our community”

David McAuley, Trussell Trust Chief Executive, says: “In just six months Trussell Trust foodbanks have given 3 days’ food to almost 500,000 people, including over 175,000 children. Redundancy, illness, benefit problems and family breakdown are some of the reasons why people go hungry. Increasingly, people on low-incomes are living on a financial knife edge where even a small crisis can lead families to face hunger. As winter begins to bite, many will be forced to make tough choices between eating and heating, and thousands will struggle to put any food on the table on Christmas Day. Foodbanks are gearing up to meet the growing need over the festive season and we’re excited to team up with Tesco once again to work on Neighbourhood Food Collection for a fifth time. Over 90 percent of food given out by foodbanks is donated by the public, so we’re reliant on people’s generosity. It’s incredible to see over a third of the UK now supporting their local food charity, and we’d urge people to keep giving.”

Greg Sage, Community Director at Tesco, commented: “It’s encouraging that people still think food poverty is a serious issue that needs to be tackled, and so many have donated to food banks as a result. This our fifth Neighbourhood Food Collection, and it’s hugely important that we dig deep and do what we can to help people who are in need this Christmas.
“This year we want to break records and provide more meals for people in need than ever before. Our customers can donate food at Tesco stores right across the UK all this week and weekend.”

This site uses Akismet to reduce spam. Learn how your comment data is processed.